As a mum, I feel that I owe it to my sprogoons to teach them the basics in the kitchen, because if they left home and the only culinary experience they had was to turn on a kettle to fill a Pot Noddle, then I would feel pretty bad! A staple like a Chesitzo Bread Recipe should be in everyone’s repertoire!

Don’t get me wrong, I grit my teeth when they are putting flour prints over the kettle and breadcrumbs are flying everywhere, but I have stuck with it, and Now Arin my youngest who is 11, can make Scrambled egg on toast, cheese toasties for example and I often get a cuppa bought up to me, which has really worked in my favour. Both Arin and my Stepson Ioan who is also 11, really love to help me in the kitchen and my heart does sink when they ask to help I’ll be honest, but they look so proud when they have finished their task, that I wouldn’t want to stamp on that eagerness, and who knows I will be able to put my feet up and have dinner made for me soon.

My daughter is 14 and has no desire to learn to cook at all, I was being interviewed last year in my kitchen and I was explaining why I love to give my kids decent food,  I shared the secrets I use to bulk the food out healthily and why I hate packet foods,  In walks Emma and asks ” can I have a pot noodle mum”! She is awkward comedy to a T!!! When she was about 3, we were shopping in a busy supermarket and across the aisle from us was an extremely obese lady, Emma decided to shout ” Ohhhh, you like Donuts don’t you Lady!

Anyway, I gave the boys the task of making up a recipe and they decided to make a bread for their breakfast. We made the dough the night before and they thought about ingredients they could incorporate into the bread.They decided to use wholemeal flour as it is healthier and then a heated debate erupted over the naming of the recipe, so in the end it was named after the Ingredients….Arin & Ioans Chesitzo bread recipe! 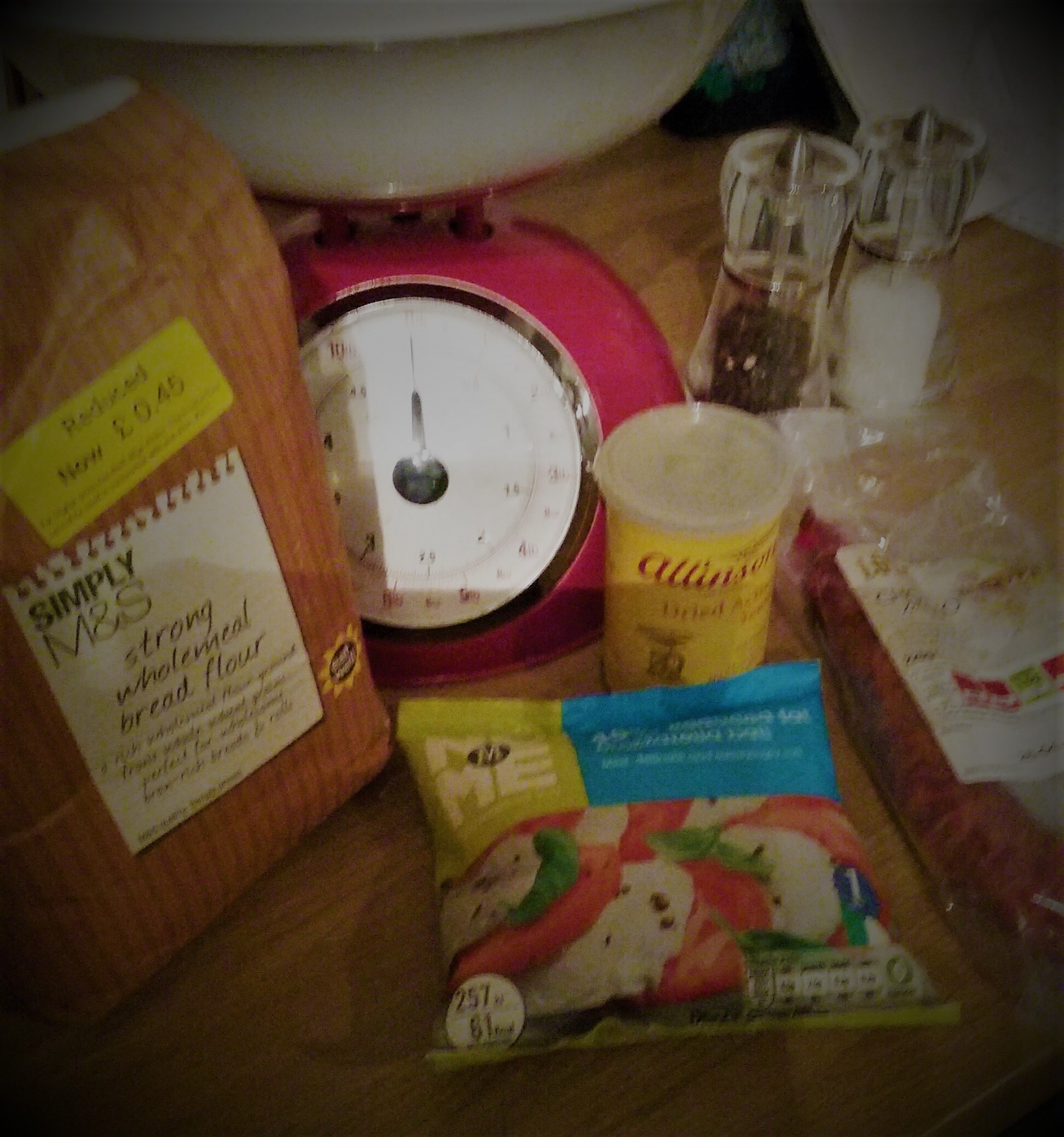 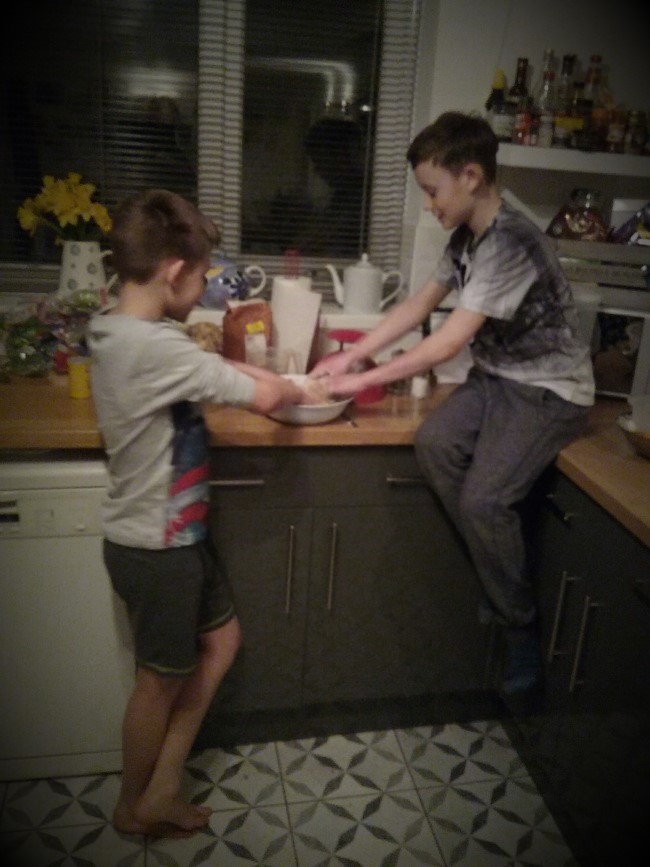 Put the flour, yeast, S&P, sugar and salt into a bowl and mix together.
When it all sticks together, pop it on a floured service and knead for 5 minutes. (Or if you want some peace, 5 minutes each !)

Pop it in a bowl and cover it with a damp tea towel. Place it in a warm place and leave for a minimum of 30 minutes but ideally overnight! 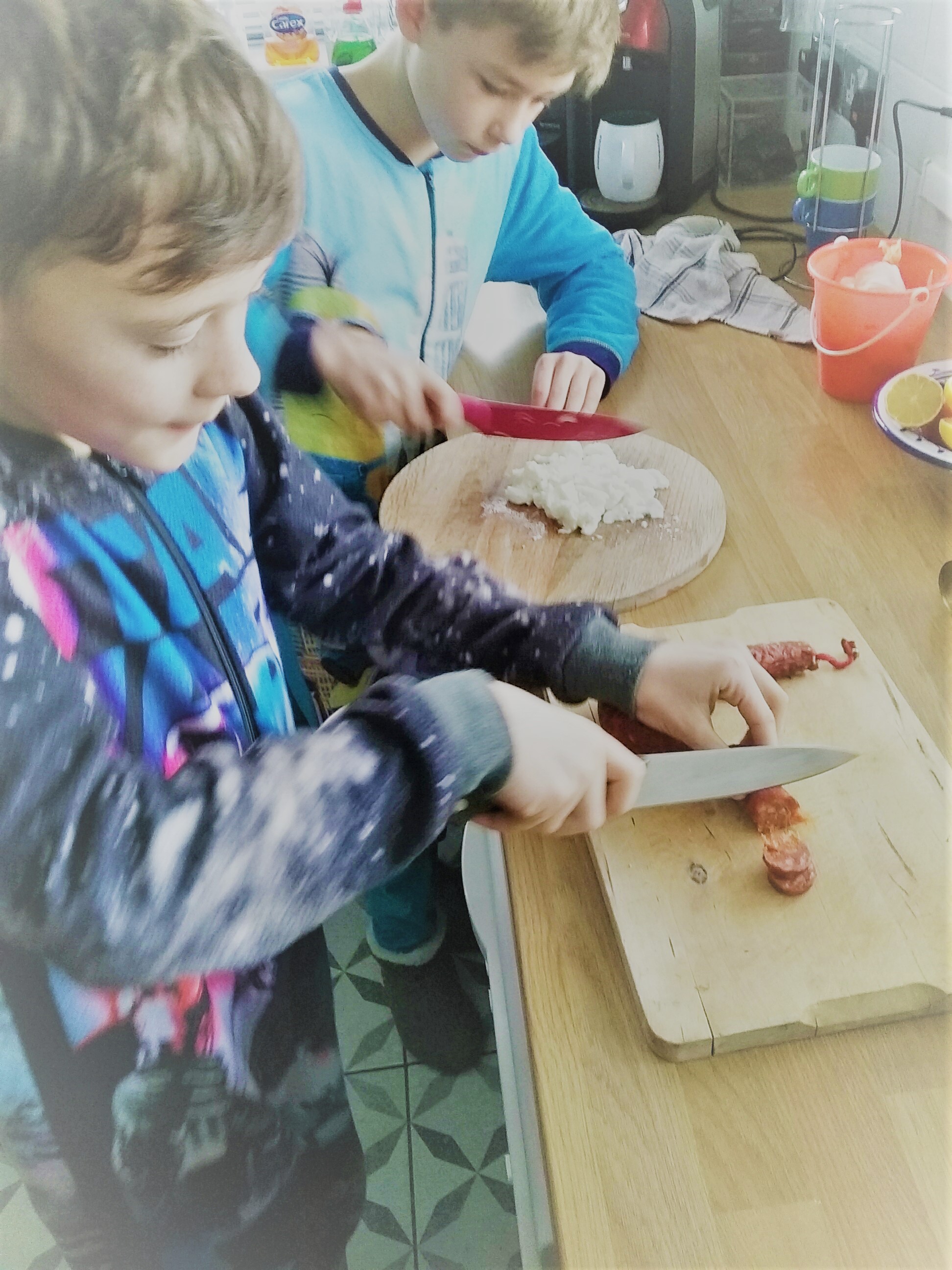 Prepare the filling by chopping it all up and mixing together. 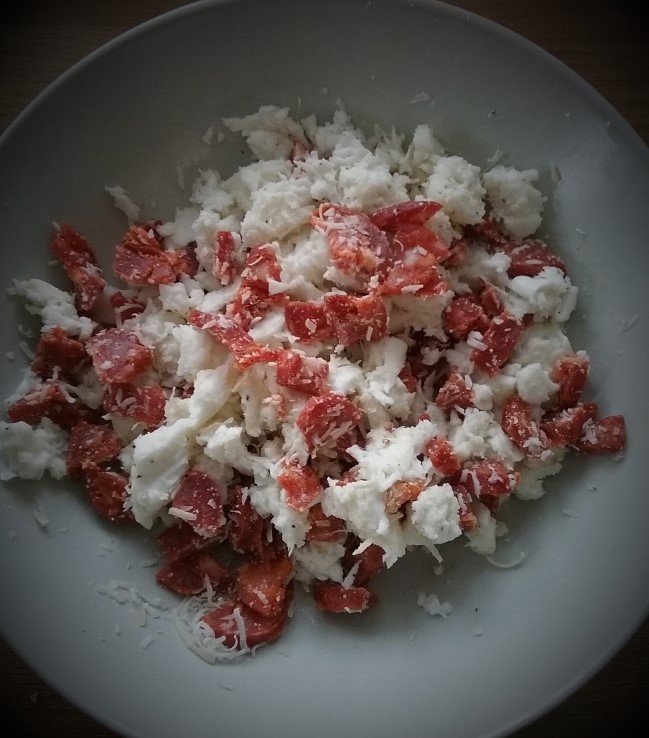 Take the dough and turn it out onto a floured surface, knead it for a couple of minutes and then add the mixture into the dough and slowly knead it in. 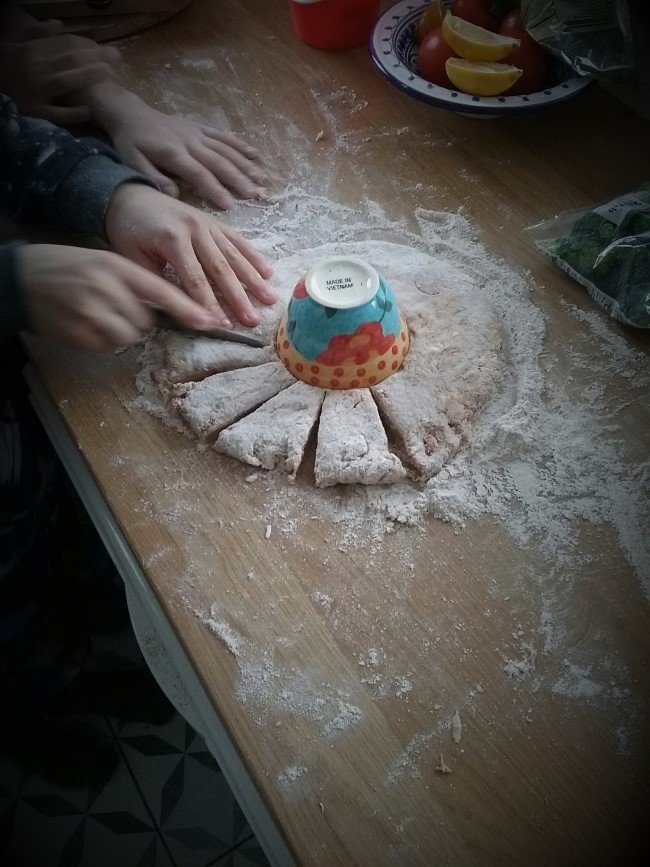 When its all folded in, roll out into a circle.
I have seen a great idea online for twist and pull bread, so the boys followed that idea. Place it into an oiled baking tray and Put a small bowl onto the centre of the dough, and gently do an imprint with it. Slice some splits around the edge of the circle, and twist the pieces twice. I had some parmesan cheese going spare, so I grated this over the top.
Put this onto the middle shelf of a preheated oven on a medium heat (180*) for around 20 minutes or until golden and crispy. 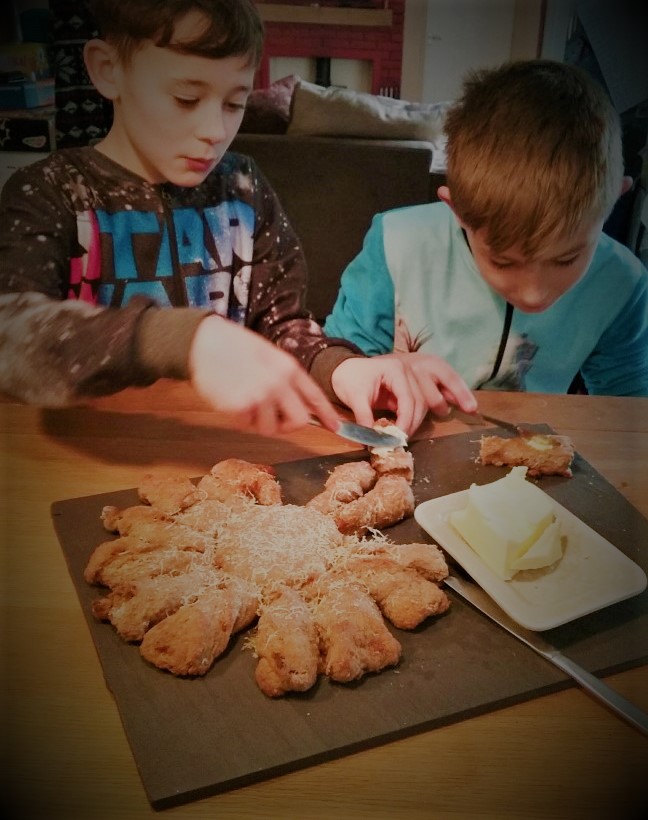 This was a flipping gorgeous bread, and the boys were really chuffed. We let it cool down for several minutes before we tucked in, but with some real butter and puffed out chests, it was a great recipe for the kids to do.

Can you believe I got Emma to make a cake !  Here is the recipe x