I think you will love the story of how I came to make this cheese and onion plait.

Sometimes, I am so thankful that my head is permanently glued onto my shoulders as I would constantly forget it otherwise, this week I forgot that I had arranged for two friends to come for dinner, and it was only when they text an hour before asking if they should fetch a dessert, did my brain click into gear and I had that OMG moment. I needed to whip up something fast! I opened the fridge and I had a good ten minutes of what the heck should I make, all the meat was in the freezer, I had nothing ready made as they children were out for the night and I think I must of stood there for about ten minutes looking at some eggs and cheese.

I had some ready made pastry waving at me, so I thought I would throw caution to the wind and have a go at something new. My gawjus friend Neil from up North, had recently been raving about his sausage and stuffing plaits, so I thought I would do a veggie version, hence this cheese and onion plait.

This is such an easy dish that it can accommodate most fillings, from savoury to sweet, but I would just make sure that the filling is not too wet, otherwise this could make the pastry soggy.

Did you know that you can freeze cheese? 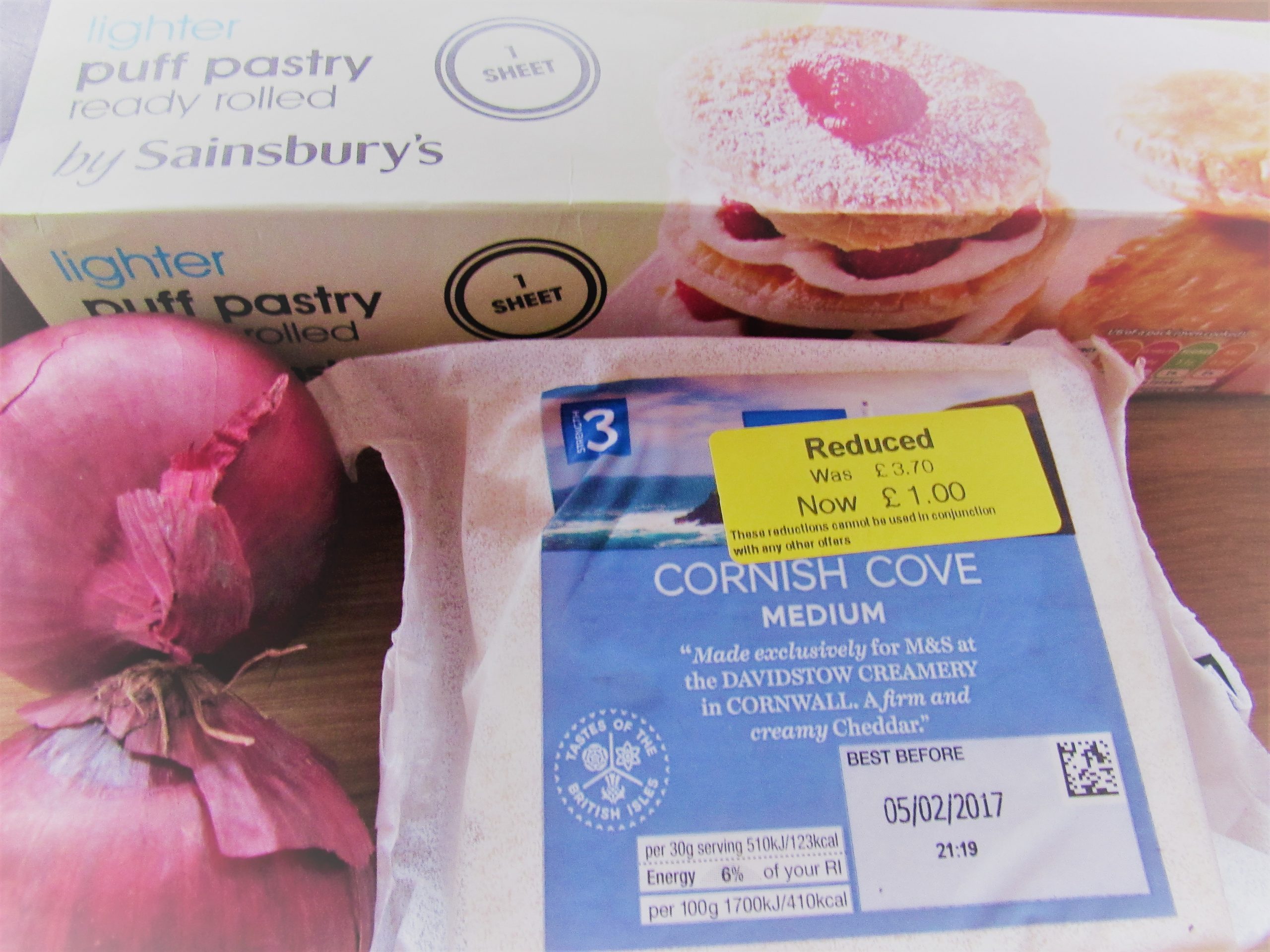 To make this cheese and onion plait you will need…… 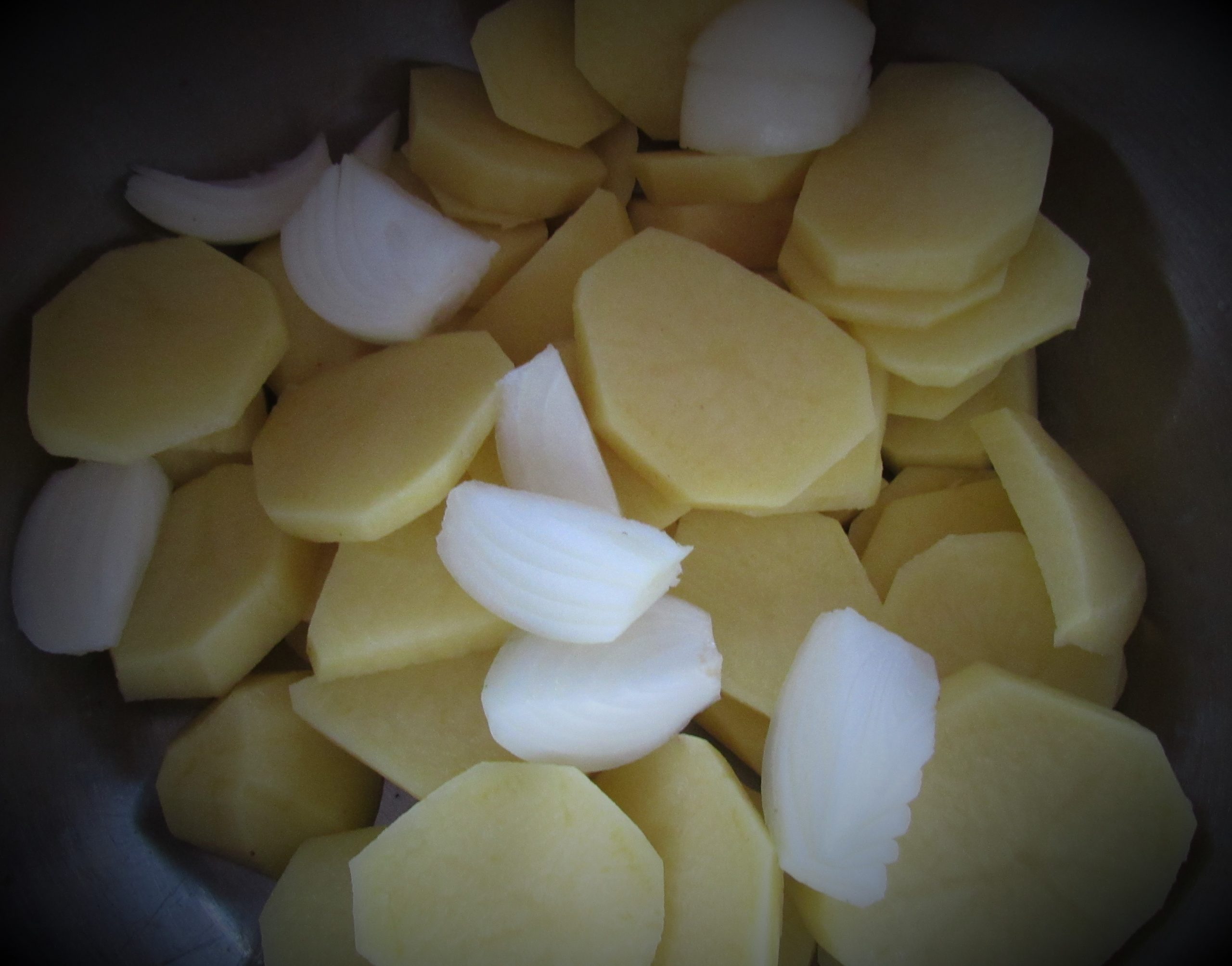 Start of by peeling, dicing and putting the potatoes and white onion into some salted water and bring it to the boil until the potatoes are nice and soft. 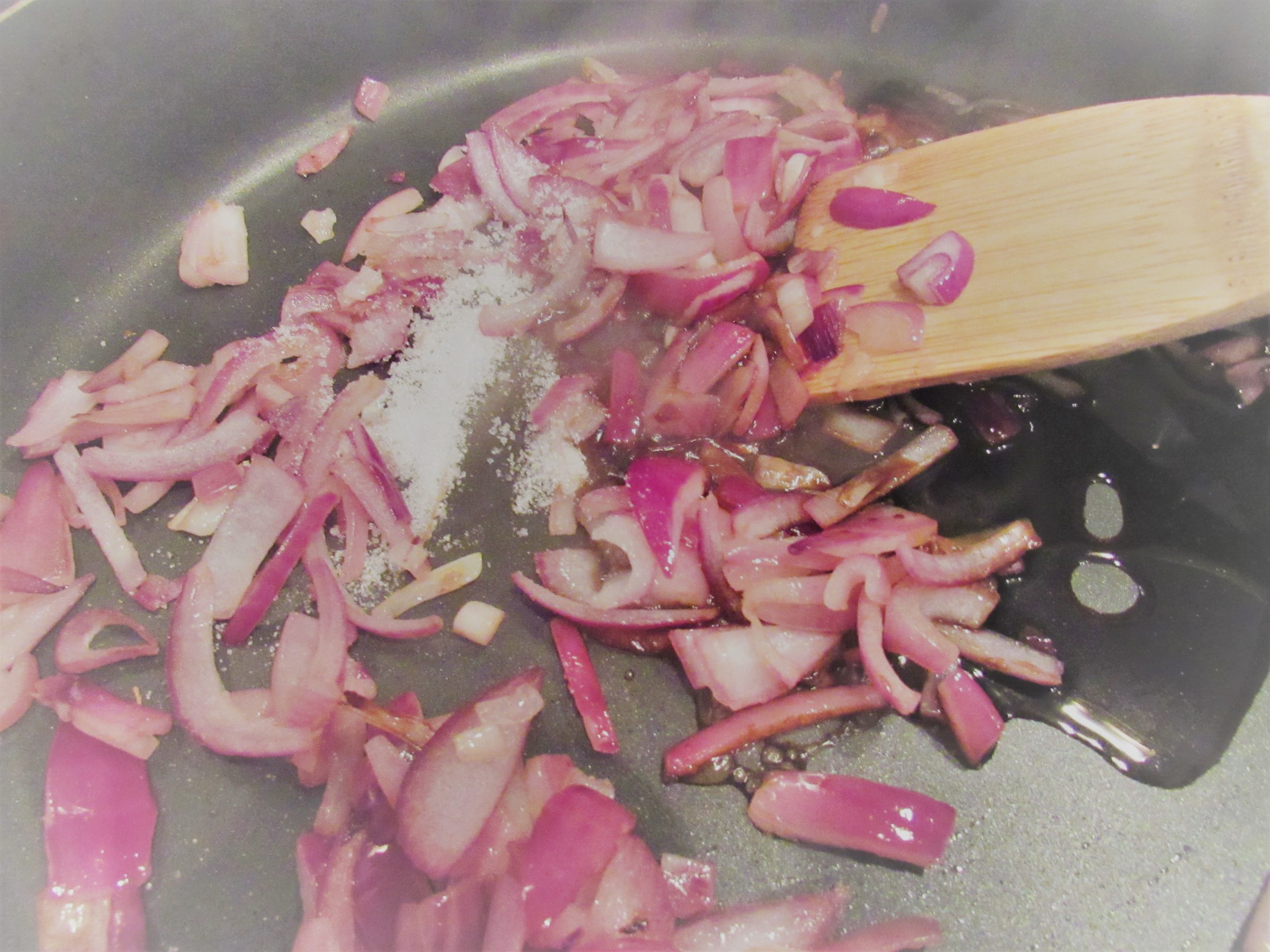 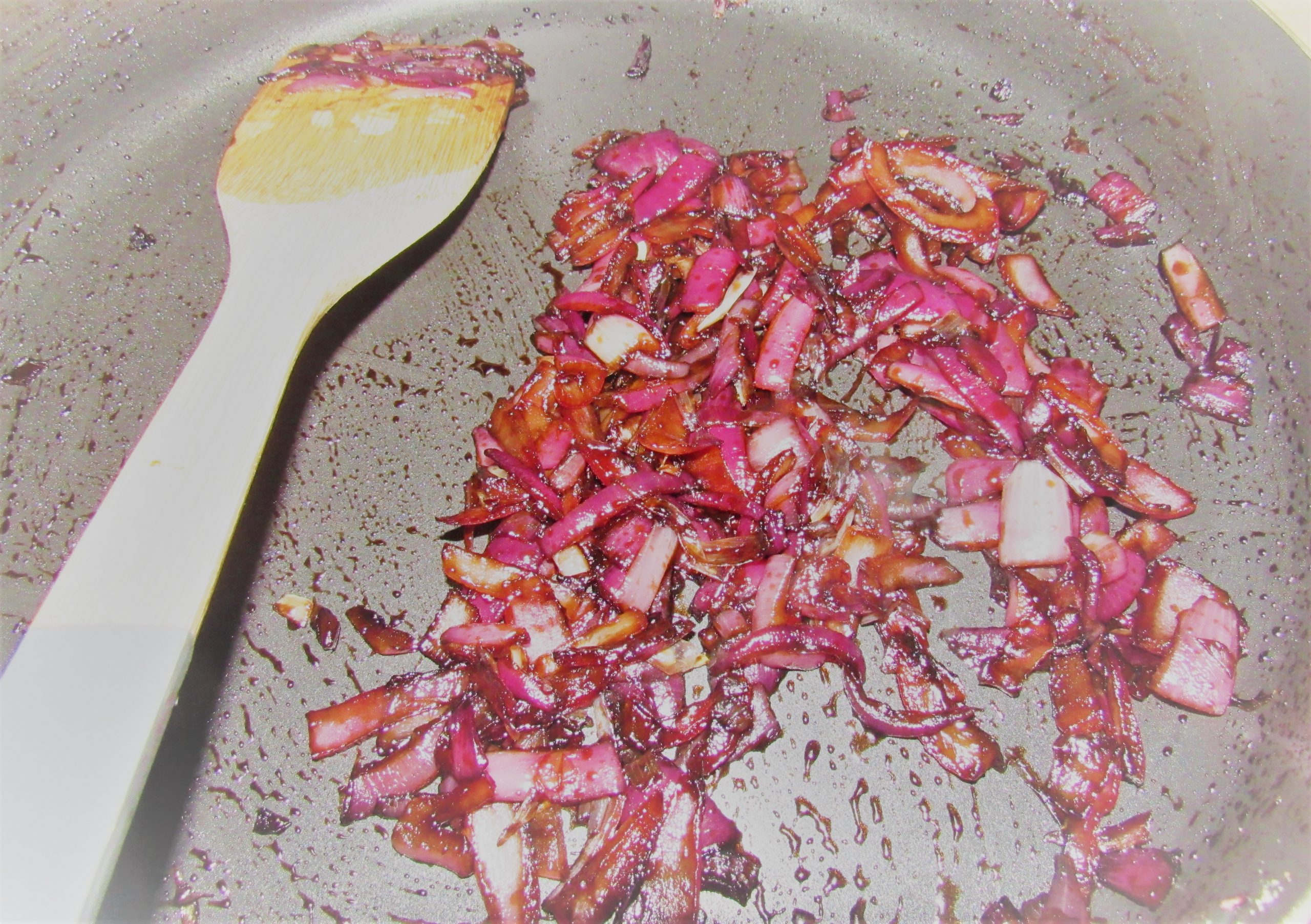 Add a pinch of salt and black pepper, and fry this of until you have a nice caramelised mess. Remove this from the heat and let this cool. 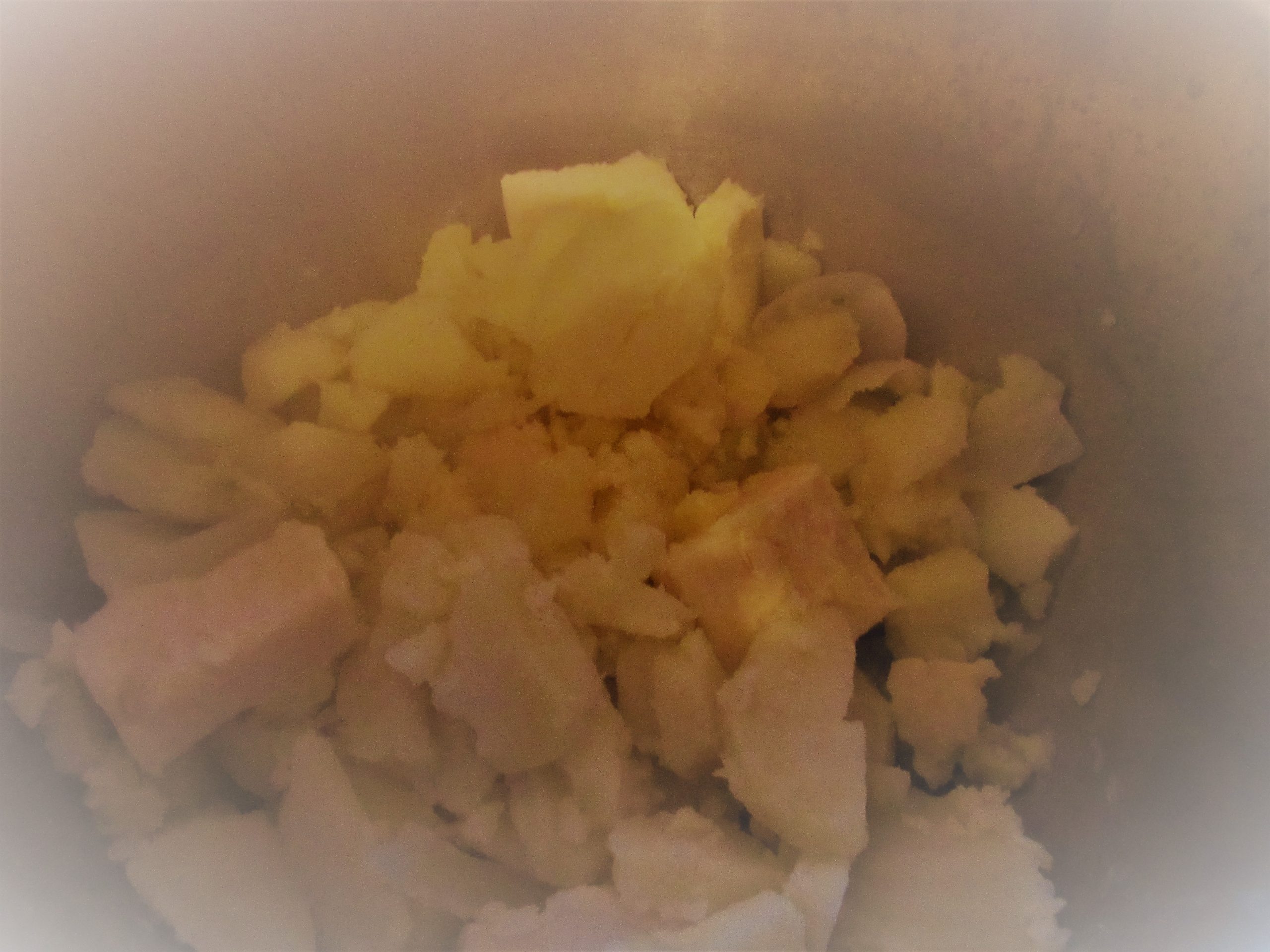 When the potatoes have been drained of all the water, add the cheese and butter and mix  and mash this together well. You may need to add a drop of milk if it is a bit thick, but only a drop. Stand this to the side to cool right down. 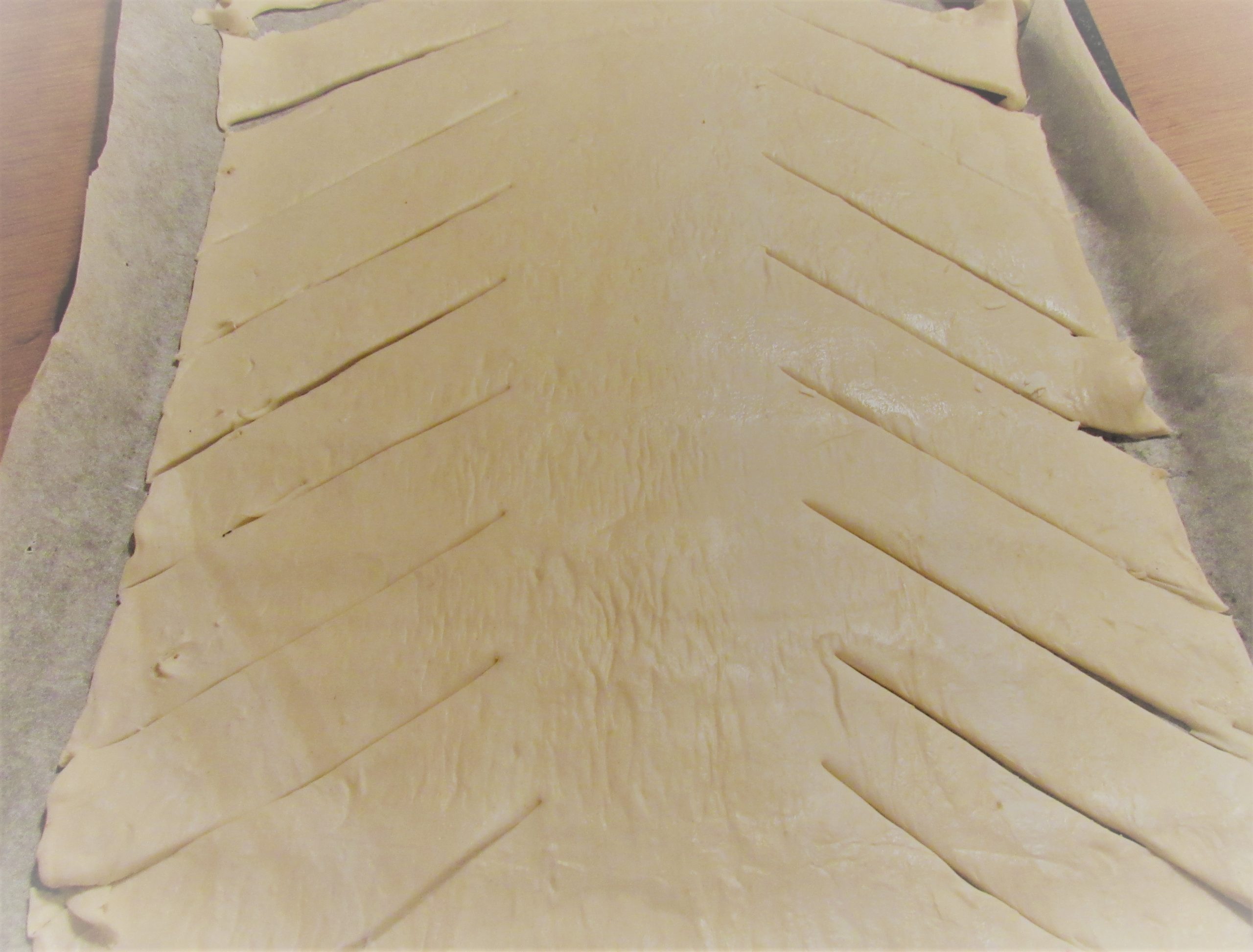 While the potatoes and onions are cooling down, put the oven onto a medium heat and line a baking tray with the ready made pastry. Slice slanted lines into the pastry leaving the centre strip untouched. 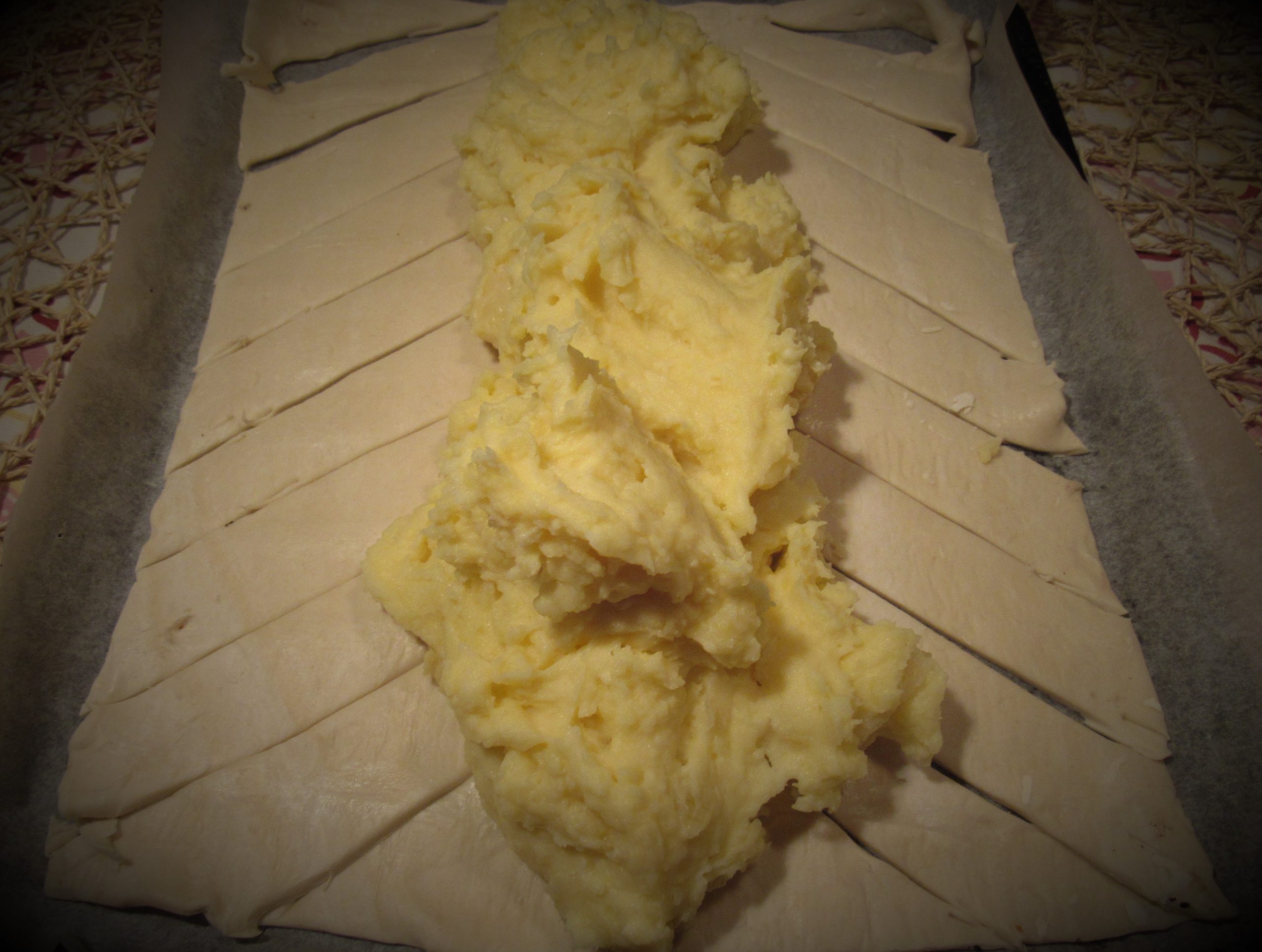 Lay the cooled potato down the centre of the pastry, if you have a bit too much potato, don’t ram it in as you will find it hard to do the plait. ( experience talking !!) 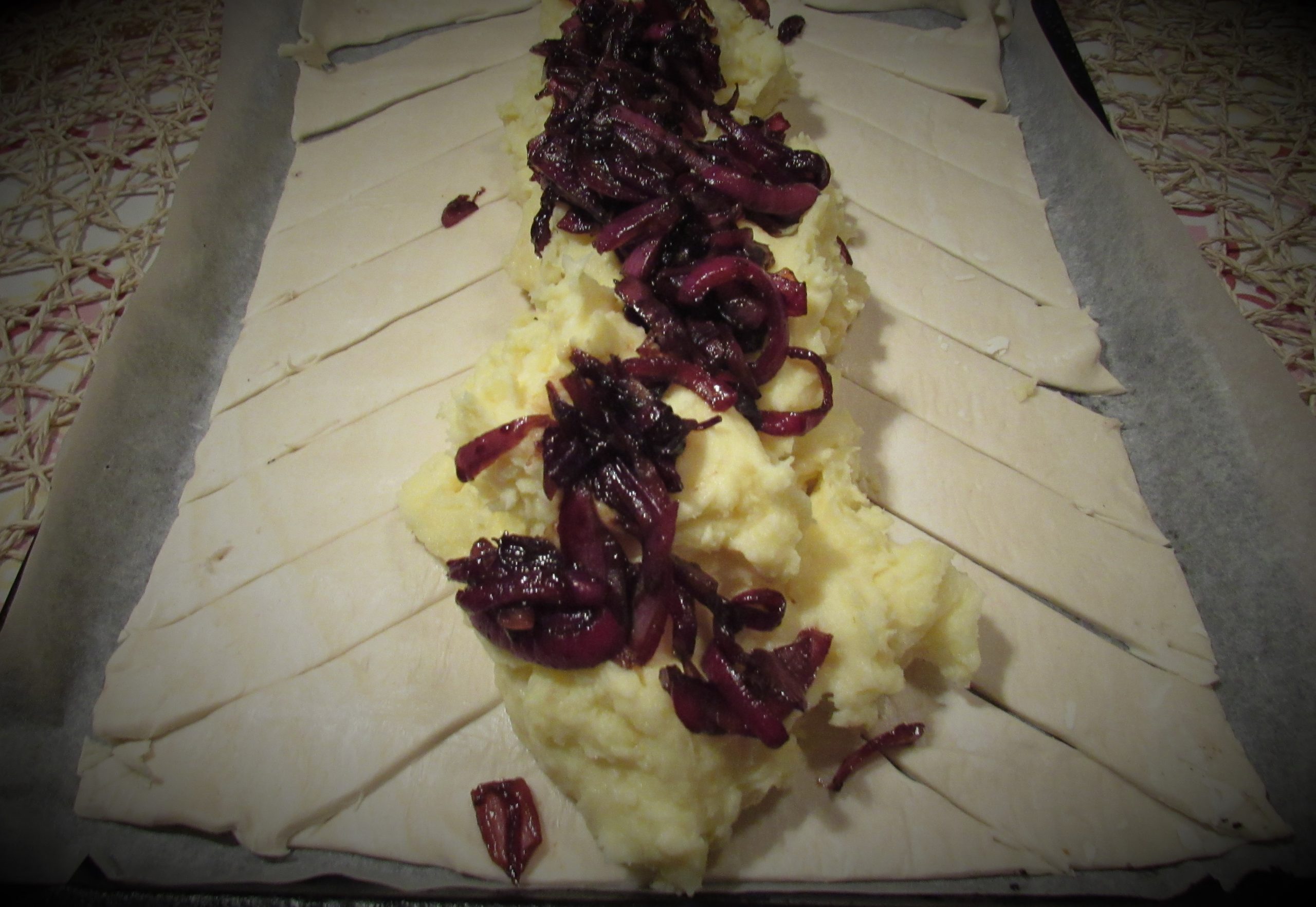 Next place the onion over the potato, now this is where the fun begins ! 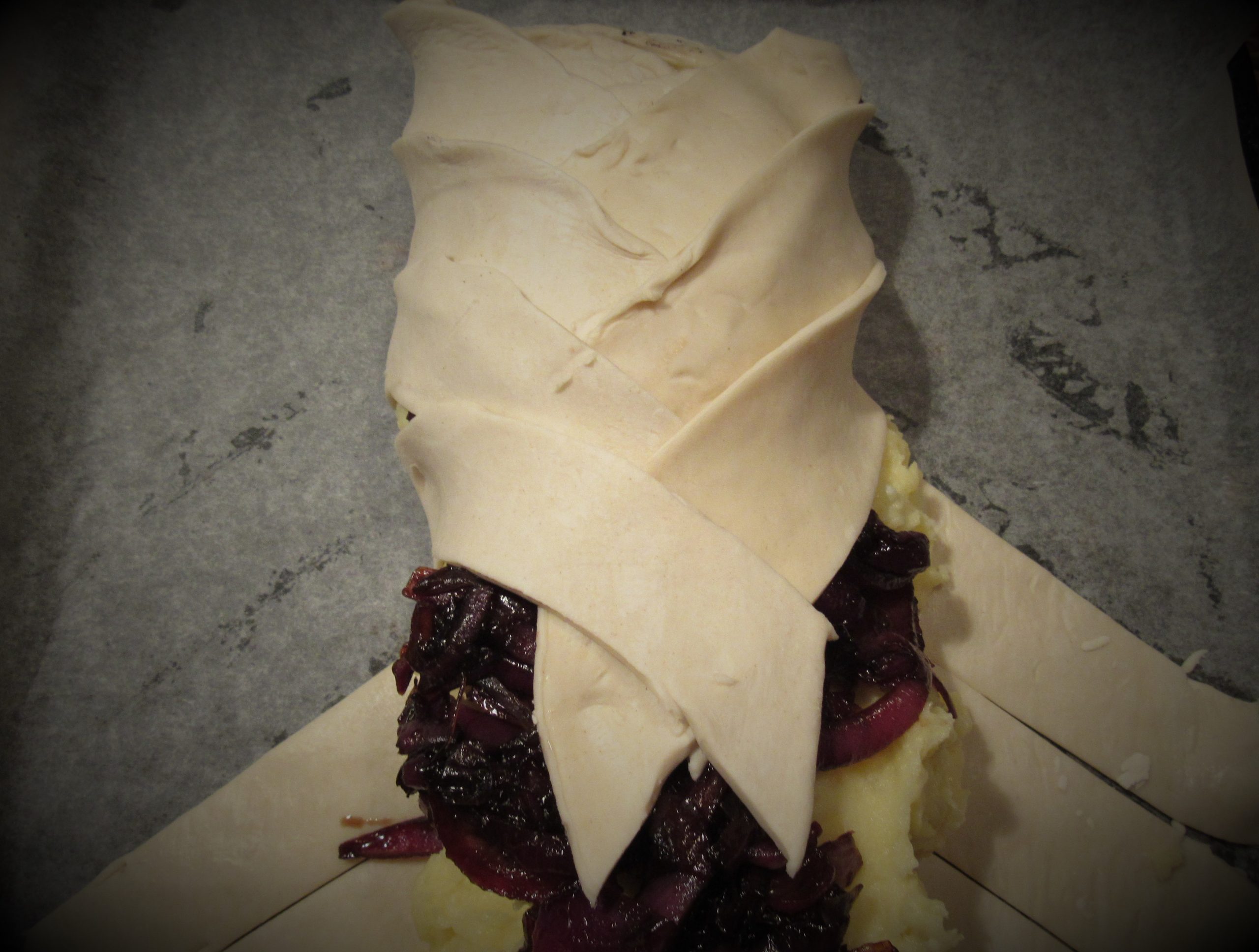 With the End piece of the Pastry, fold that over the end of the potato and then with the flaps of pastry, start wrapping them over one another s in the picture….Continue to do this until you are almost at the bottom, and then before you wrap the last four flaps, fold up the edge of the pastry, so that it neatly holds in the potato and the four flaps of pastry can be wrapped over it nicely. 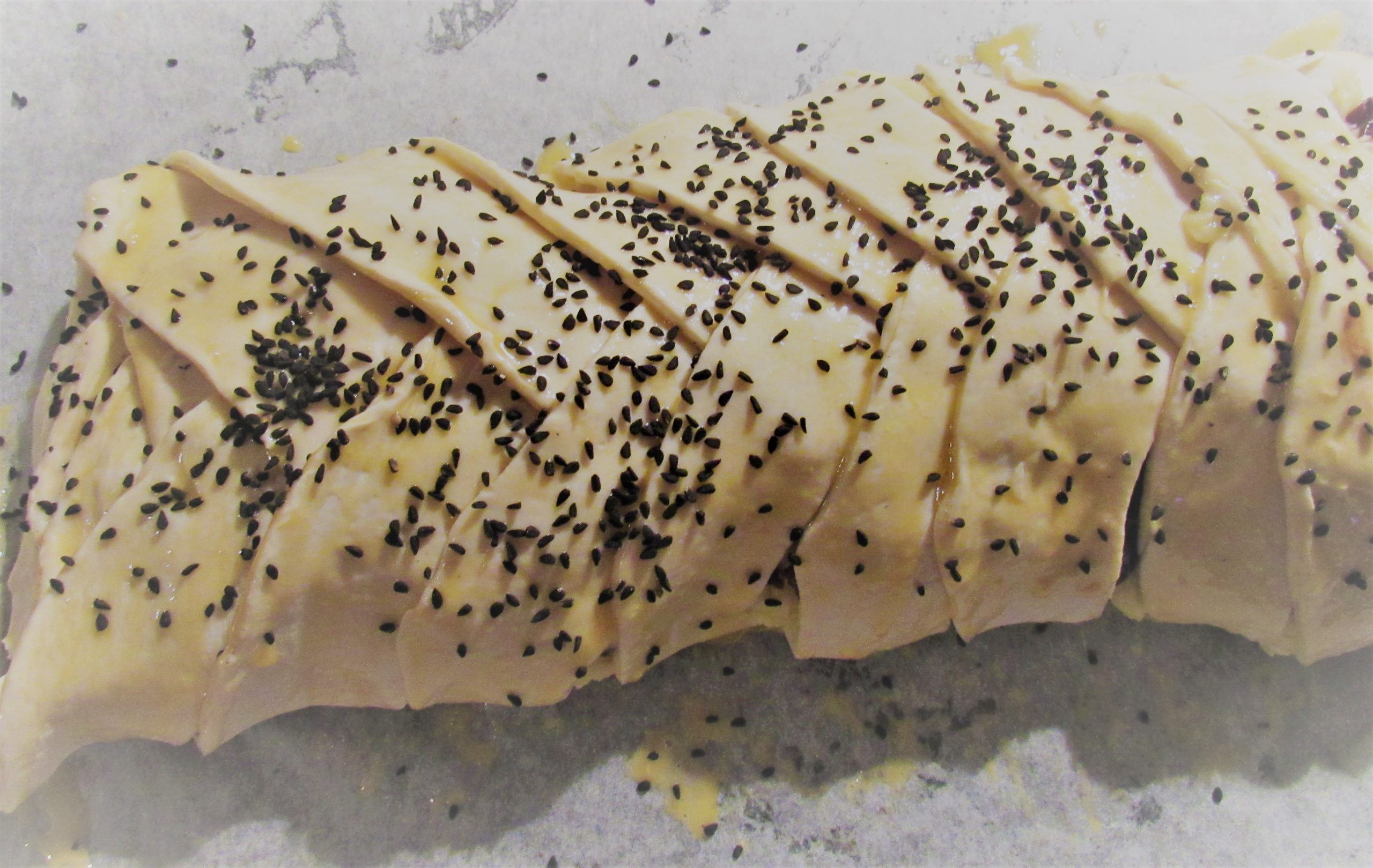 Paint the egg yolk over the cheese and onion plait and sprinkle the Nigella seeds over the top. Bake this in the oven for around 15 / 20 minutes or until the pastry is nice and golden. 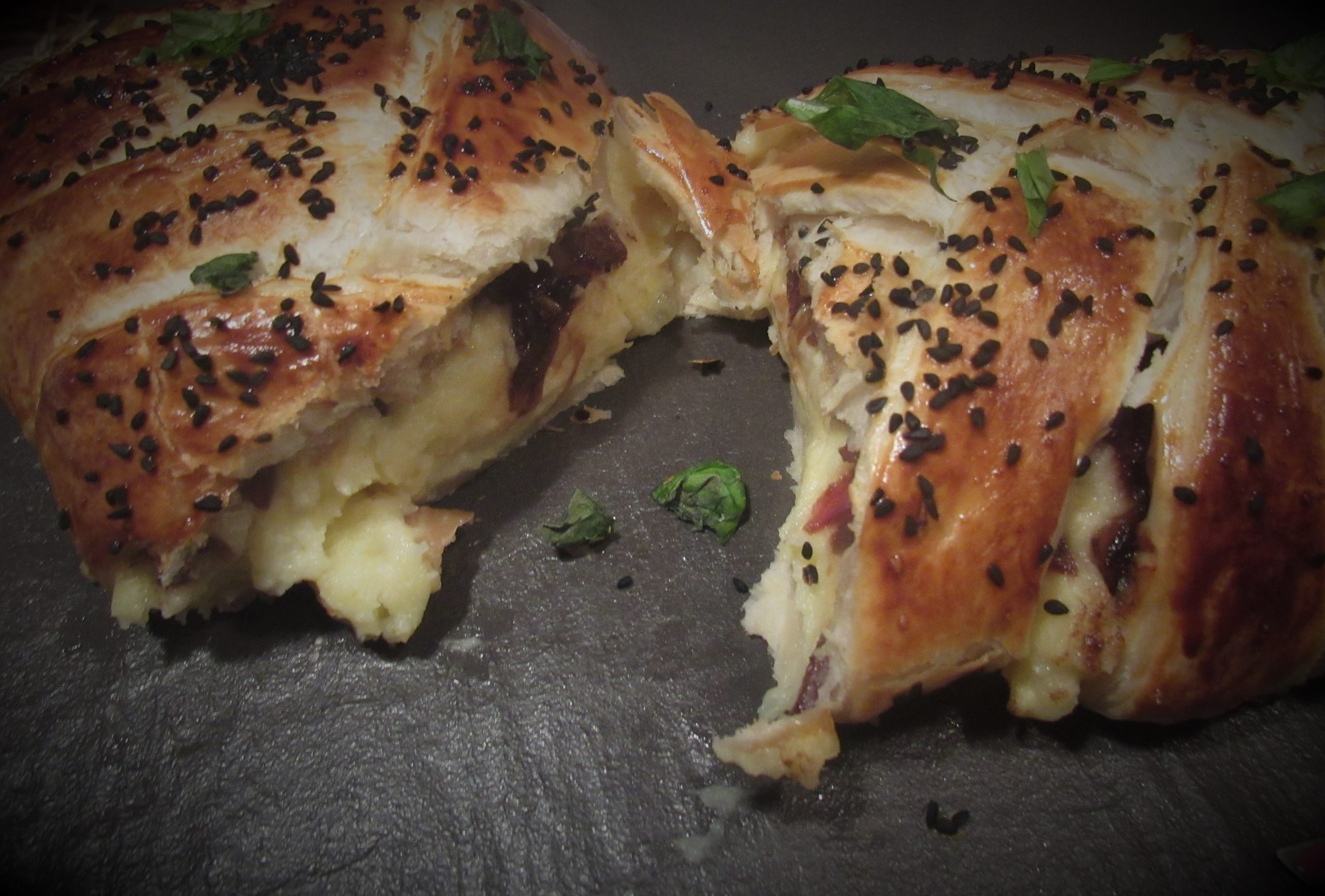