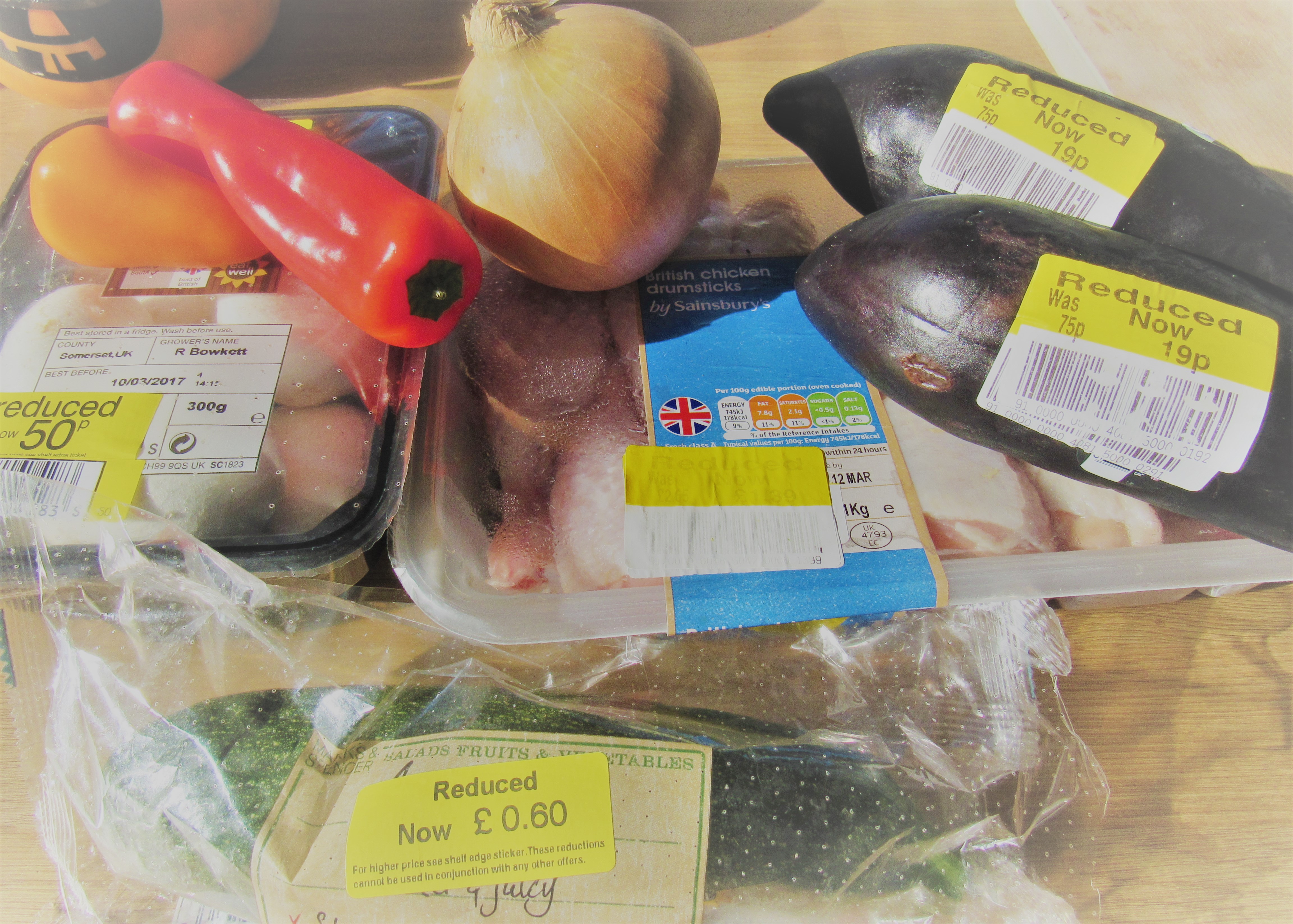 There’s a lot of uncertainty in the world at the moment. The never ending battles in the Middle East, the chubby kid with a bad hair cut from North Korea (or is it South – I can never remember) whose daddy died and left him a country along with some shiny nuclear weapons to play with. The many times bankrupt billionaire businessman (also with bad hair) currently residing in the big house located at 1600 Pennsylvania Avenue who is desperate to be best buddies with an ‘alleged’ billionaire gangster who also happens to be in charge of Russia. His friends call him Vladimir; to the rest of the world he’s President Putin.

It seems we’re constantly on the brink of war. Our politicians are often accused of being out of touch and guess what? They are! Rather than pointing their binoculars towards North (or is it South?) Korea to see what chubby cheeks is up to, they need to realise that everyday there’s a war being waged in Britain. It’s not on our streets, it’s in our supermarkets. You only have to head to any of the big four at a certain time in the day to see that its all-out guerrilla warfare in the aisles.

Until recently, yellow sticker warriors were a small band of fighters spread throughout the UK. However, the recession, poor wages and rising prices has seen our ranks swell. We’re now individual warriors who are well trained and fighting fit. There are now so many of us that I think it’s time that the supermarkets got together and drafted the food equivalent of The Geneva Convention. In war, prisoners are supposed to be treated humanely and have certain rights. This is desperately needed in our shopping aisles, particularly the one with the reduced food. At the moment it’s everyman for himself which means things have gotten pretty ugly. We’re no longer brothers-in-arms chanting, ‘all for one and one for all.’ We’re now at war with each other and have had to resort to using guerrilla tactics to secure the best bargains.

Most of my shopping is done at a 24hour Superstore. The reductions are brilliant. So brilliant in fact, that when my mother came to visit and I unpacked my daily bargains she declared, “Your Whoops! are so much better than ours.” This caused my partner to spit out his tea and have sleepless nights. He was frightened that my mum would move the eight junctions up the M6, not to be nearer to us but to grab better bargains. At 7.15pm every evening there are people wandering aimlessly around my local supermarket with empty trolleys. These are the hard core yellow sticker warriors. Just like the SAS, they are on a reconnaissance mission; scoping the area, looking out for the enemy and preparing for hand to hand combat. At around 7.30pm, one of the staff, who is always ‘Happy to Help!’ wheels a trolley laden with goodies ready to be reduced out onto the shop floor. It’s at that moment all hell breaks loose.

There’s always the Chinese lady (I’m guessing is in her mid-to late sixties) I’ve seen her at my gym. She may be petite and very nimble on her feet but she’s also hard core. I’ve seen her on the cross trainer, she can go for hours without breaking a sweat. At 7.20pm she’s silently and serenely walking between the aisles but as soon as the member of staff whips out the yellow sticker ‘clicky thing’ she leaps over everyone, spins in the air like they do in Kung Fu films and snatches the bargain as you’re about to grab it. She’s Crouching Tiger Hidden Dragon. The woman is a Yellow Sticker Ninja!

The bus driver’s wife is a battle scared yellow sticker veteran. On any other occasion she’s absolutely delightful and very chatty. That’s how I learned that her husband drives a bus and she’s got three kids. In the evenings gone is her friendly demeanour she’s transformed into the female Braveheart. She walks into the supermarket, red hair flowing in the wind (OK, the air conditioning) face streaked in war paint, extra-large bags for life held above her head screaming, ‘You can take the free plastic bags but you’ll never take our yellow stickers!’ Although she’s built for comfort and not for speed it doesn’t stop her. She uses her trolley like a battering ram. Anyone hogging the space in front of the reduced food is quickly and ruthlessly shoved out of the way.

Things are getting so unruly that some of my fellow warriors have joined forces making it more difficult to snag the best bargains. They are like a tag team of wrestlers in WWF. Take Sid and Nancy, a father and daughter team. Nancy has the physique of a fighter (the bare knuckle kind) She takes no prisoners, constantly bobs on the balls of her feet and always seems ready to go a few rounds in the ring. Sid and Nancy arrive at reduced food time dressed for war in matching hoodies and tracksuit bottoms (the shiny ones with three white stripes down each side) Nancy is fearsome. She goes to my Body Combat class and is not the sort of person you’d shout, ‘Come on if you think you’re hard enough’ at, not unless you had a death wish. They don’t bother with reconnaissance, they don’t need to. As soon as they spot the food being reduced Nancy, arms pumping with a mean hungry look on her face runs down the aisle to the theme music from Rocky. As soon as everyone hears the music they quickly scatter in all directions lest they get trampled beneath her bright orange trainers. Before you can hum two bars of ‘de de derrr, de de derrr’ (the theme from Rocky) her dad, fast on her heels, skids to a halt right in front of all the reduced food with smoke bellowing from his heels.

Another couple who have an unfair advantage are the Hairy Biker and his wife (yes, I do have nicknames for everyone) He is the proud owner of a mobility scooter and uses it shamelessly. It has wing mirrors, lights, makes a beeping noise when in reverse and is bigger than a Ford Fiesta. They have a habit of blocking everyone’s access to the reduced food and then having long discussions about the different items. I once spent ten minutes playing pass the celeriac with them. It was reduced to 10p but they didn’t know what it was and didn’t know how to use it. “Is it some sort of cabbage?” The Hairy Biker asked his wife. She didn’t have a clue so asked me. “Is this a cabbage?” I explained that it was a root vegetable. Then came the, ‘How long do you cook it for?’ and ‘What do you have it with?’ Honestly, it was more pressure than the Countdown final! They were going to try it, then they weren’t. Shall we? Should we? What do you think? After ten minutes of going back and forth and trying to hurry them along, I patiently explained that I use celeriac to make soup (with parsnips and a drop of coconut milk) She then informed me that she didn’t like parsnips and he couldn’t digest coconut milk so the celeriac was put out of its misery and finally put into my basket. That’s the other thing about being a yellow sticker warrior; we are, deep down, a very friendly bunch willing to share hints, tips and recipes, united in our common goal of saving money.

After a good session of pushing, shoving, grabbing, tutting and eye rolling, I often walk away feeling euphoric that I have managed to grab several bargains at a ridiculous price despite having no room whatsoever in my freezer. I smugly saunter over to the check-out- that’s another thing about hard core yellow sticker warriors, we never use the self-service checkouts. We want as many people as possible to witness how much money we’ve saved and to look at us like heroes; with awe and envy. However, it can be extremely disheartening when your ten items come to £3 but the person in front, usually Sneaky Alice, has fifteen items for £2.09. On Christmas Eve this price differential can actually ruin your Christmas, especially if you’ve sacrificed the first hour of The Wizard of Oz to go on the hunt for last minute yellow sticker bargains.

For me, the best thing about being a yellow sticker warrior is being able to get my favourite food and try new ones at a knock down price. In my house we’ve been able to sample things like venison meatballs for 99p (love them) Fresh tuna steaks for 30p (my partner hates them, he prefers his tuna out of the tin) Dim Sum and Sushi (me yes, my partner, no) I’ve had a go at making Moules Marinières with a bag of fresh mussels that cost 15p (I bought two) and served it with a 20p bag of baby leaf salad and a loaf of chilli bread that cost 10p. It was the best shopping I ever did at ten minutes to four on a Sunday afternoon. We yellow sticker warriors may battle it out until the death in supermarket aisles and feel aggrieved at some of the tactics and shenanigans deployed by some of our fellow warriors. However, at the end of the day (7.45pm Mon-Sat, 3.50pm on Sun) all is fair in love and yellow sticker war.